A Walk Through Historic Williamsburg

The second part of our Williamsburg visit was a day spent doing the historic part of Williamsburg. It's important to note that a single day isn't really enough, but it is a very nice way to spend a day and we had nearly perfect weather.

We saw the key things we wanted to see and returned in the evening for a lovely meal at the Kings Arms Tavern, where nearly a quarter century ago (!) I proposed to The Lovely Karen.
Posted by Unknown at 8:11 AM No comments:

A Visit to the College of William and Mary

We're in Williamsburg, Virginia, for a few days of spring break. We wanted a get-away and we've taken advantage of the visit to start Christina's college search process with a tour of the College of William and Mary.

William and Mary is a tough place to start, I expect. It's such a lovely campus and seems a desirable place to go to school. I worry it might spoil the game for the other schools.
Posted by Unknown at 8:00 AM No comments:

On the Street Where You Lived (Part 2)

I spent some time this weekend searching through the newly-released 1940 Census records for information about my parents' childhood households. I didn't find anything really new about my family, and there's nothing here that they couldn't easily tell me themselves, but I'm a data geek, a history buff, and a former Census Liaison for state government, so this was fun.

Part 2: The Farrars of Meadow Road 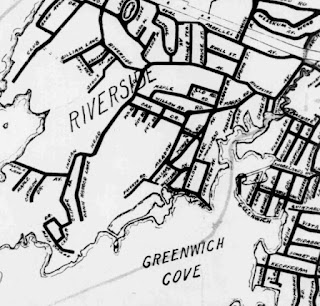 My next search of the 1940 Census was in Greenwich, Connecticut, where my mother grew up in the neighborhood of Riverside. Her family lived on Meadow Road, at the apex of the triangle it forms with Tower Road. They were part of Enumeration District 1-62.

My mother, Judith Farrar, was nine on Census Day in 1940; she would turn ten later in the spring. She was the youngest of three children of John and Roberta Farrar. Her sister Joan was 14 and her oldest brother, Robert, was 16 that spring. Their parents were both 41 years old.

The household included a nurse, 48-year old Edna Bullock from Massachusetts. She was there for Joan, who was unwell. There was also a maid, Geneva Lumpkins (I think), a 20-year old from Alabama. My mother tells me that Geneva was not there much longer. As she put it, "The war changed a lot of things." Robert and their father would both enlist; Robert became a navigator on B-17 bombers out of England.

Before the war, though, my Grandfather was making films. The Census form lists his occupation as Movie Director. My brother John found a listing for his company, Mercury Pictures, in a 1948 edition of the Journal of the Society of Motion Picture and Television Engineers. He also owned a hardware store and wrote jazz music.

Among the other occupations listed in their neighborhood in 1940 was an interesting mix of the wealthy and people who work for them. There were lawyers, publishers, and bank vice presidents, as well as maids, cooks, housemen, and a butler. That neighborhood is still very high rent; last time we visited we had to get special permission to go through the gates.

In Part 1, we looked at my father's household.
Posted by Unknown at 10:01 PM No comments:

On the Street Where You Lived (Part 1)

I spent some time this weekend searching through the newly-released 1940 Census records for information about my parents' childhood households. I didn't find anything really new about my family, and there's nothing here that they couldn't easily tell me themselves, but I'm a data geek, a history buff, and a former Census Liaison for state government, so this was fun.

Part 1: The Mahaffies of O Street 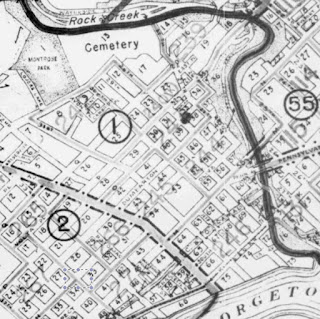 First, I searched maps of the Georgetown district of Washington, DC, where my father grew up on O Street, between 30th and 31st Streets. I found that that block was part of Enumeration District 1-245 in 1940. A little scrolling through the scanned population schedules for that district led me to an enumeration  sheet that included my grandparent's household.

My grandfather, Charles D. Mahaffie, Sr., was 55 years old on Census Day in 1940. He served as a Commissioner on the Interstate Commerce Commission. My grandmother, Isabel Mahaffie, was 47 and listed as a homemaker, though undoubtedly she continued to work, if not full time, as an artist. My father was about to turn nine years old and is listed as having completed three years of school.

I was interested also to learn about the people of the neighborhood. This is a partial picture, since the folks on the other side of O Street are in a different enumeration district, but a quick review of the people in the area suggests a fascinating mix.

There were a number of salespeople, a few people employed in the dairy business, a photographer, and the assistant chief of the Library of Congress (Maud Brady) who lived in the same house as a secretary at the Library (Cornelia Brady). I think they were Mother-in-law and Daughter-in-law.

Up the street lived a young woman named Besley (first name illegible, at least so far) who was listed as a Secretary for the Interstate Commerce Commission.

Around the corner, on 30th Street, lived Paul L. Townsend, with his wife and kids. The census form notes that he was born in Delaware, and Townsend is a big name in Delaware; so I did a search. He turns out to have been the son of US Senator John G. Townsend, Jr., of Delaware.

I work across the street in Dover from a building named after the elder Townsend. Small world.

In Part 2, we visit the household of my Mother in Greenwich, Connecticut.
Posted by Unknown at 8:52 AM 1 comment: 18th Hole, Shawnee, a photo by mmahaffie on Flickr.
My friend Andy and I went north to Milford on Sunday for a game of golf on the old Shawnee Country Club course, now known as The Rookery North. It was Andy's birthday gift and I was excited that we had a chance to play what has been, until now, a private course.

Shawnee Country Club dates back to the late fifties; the golf course is fully mature. The club, however, seems to have fallen on hard times and this year the golf course is under new management and is open to the public. That's us.

Course management has been taken over by the folks who run The Rookery, east of Milton. They're calling the "new" course "The Rookery North at Shawnee."

The course is not in great shape, but it's not too bad. The fairways are mostly dead grass; they appear to be resetting things. The tee boxes and greens are fine, though, and the rough, out of bounds areas, and on-course plantings are all quite nice.

I'd play there again.
Posted by Unknown at 9:46 PM No comments: